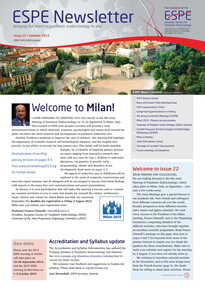 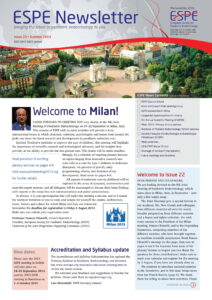 Bringing The Latest In Paediatric Endocrinology To You

Welcome to issue 22 DEAr frIEnDS AnD CollEAguES, We are looking forward to the 9th Joint Meeting of Paediatric Endocrinology, which takes place in Milan, Italy, in September – now only a few weeks away. The Joint Meetings give a special flavour to our academic life. new friends and colleagues from different countries all over the world, broader perspectives from different societies and a busier and tighter schedule. We wish every success to the President of the Milan meeting, franco Chiarelli, and to the organising Committee, comprising members of the different societies, who have brought together an excellent scientific programme. read franco Chiarelli’s message on this page, then turn to pages 4 and 5 for keynotes from some of the plenary lectures to inspire you (we thank the speakers for these contributions). Make sure to mark your calendar and register for the meeting by 2 August, if you have not already done so. We continue to introduce national societies in the newsletter, and in this issue brings news from the french Society (page 6). We thank them for telling us about their activities. Please Welcome continued from page 1 share news from your own national societies with us. We also report from the very successful ESPE Winter School (page 8) and the equally successful academic ESPE Science School, as well as the Bone and growth Plate Working group (both on this page). you will find perspectives on paediatric endocrinology in China (also below) and Africa (page 3), and an interview with a new member of ESPE (page 7), who explains what our Society brings to her academic life. We continue our series previewing the Yearbook of Pediatric Endocrinology, EDITorIAl BoArD Indi Banerjee, Manchester, uk george P Chrousos, Athens, greece gabriel Martos Moreno, Madrid, Spain ESPE Science School courtesy of its editors, Ze’ev Hochberg and ken ong (pages 6–7). This initiative is greatly appreciated by members, and we are pleased to highlight some new articles. We thank the editors cordially. We also thank Mark Dunne and karen Cosgrove from the university of Manchester, uk, for sharing their research on congenital hyperinsulinism (page 3). We hope articles such as this will foster increased collaboration throughout Europe. We, as your Editorial Board, will do our best to continue to maintain the quality of the newsletter and enrich it with feedback from all members. I would also like to thank my colleagues in the newsletter team and Caroline Brewser from Bioscientifica, with whom I have a chance to always work with much enthusiasm and in excellent collaboration. yours sincerely, Professor Feyza Darendeliler Editor, ESPE newsletter feyzad@istanbul.edu.tr

THE 2013 ESPE SCIEnCE SCHool In ACrE, ISrAEl, on 9–12 May was attended by 23 students (13 with MD/PhD). They came from countries across Europe, but also included two delegates from the Sociedade latino-Americana de Endocrinología Pediátrica, two from the Asia Pacific Paediatric Endocrine Society, two from the Pediatric Endocrine Society and one from India. The faculty comprised 10 ESPE members and 15 guest speakers, with a Scientific Committee including george Chrousos (Chair), Ze’ev Hochberg (Co-ordinator), Dov Tiosano (local organiser), Jean-Claude Carel, olle Söder, and nicolas de roux (the next Science School organiser). on the programme were: • a general research topic (e.g. career development, ethical consideration, or scientific approach) • group work to discuss students’ research and review a grant application • leading science concerning ‘Human evolution and perspectives in child health’ The scientific element was of the highest quality and very relevant to paediatric endocrine practice, moreso than any previous ESPE Science School or new Inroads in Child Health Conference. About half the lectures will be published in the prestigious journal BMC Medicine (impact factor 6). following a decision by Council, the Science School will continue at 2-yearly intervals, with the next in Paris in 2015. Ze’ev Hochberg, Haifa, israel z_hochberg@rambam.health.gov.il

THIS WorkIng grouP’S SESSIon In MIlAn will include top speakers from America
and Europe on the development of growth plate cartilage and the skeleton, as well as
management of leukaemia-induced growth and bone disease and vitamin D.
Vitamin D is a hot topic, with much debate about deficiency and insufficiency
thresholds, supplementation and treatment doses, whether extra-skeletal effects exist
and what relevance they have from a global point of view. last but not least – how
should all nations adjust their health policies and at what cost?
We are planning a worldwide paediatric consensus conference on vitamin D, and
have started setting up a working group of experts to formulate consensus questions.
I have been busy communicating with the ESPE Clinical Committee and raising the
necessary funds. As we now have CPC approval, we will contact sister societies and
proceed with the consensus in the next 12 months.
In its second year, the European Bone and growth Plate network is being actively
used to encourage discussion of supra-regional public health issues (such as vitamin
D), collaborative research and audit, distribution of information on meetings and
updates, and ad hoc discussions. I encourage ESPE members interested in being
included in this network to contact me.
Wolfgang Högler, wolfgang.hogler@bch.nhs.u

<ESPE HAS BEEn forgIng lInkS with the Chinese Society of Paediatric Endocrinology and Metabolism (CSPEM). The CSPEM generously invited Jan lebl (Prague, Czech republic) and olle Söder (Stockholm, Sweden) to their meeting in yantai in october 2011. Both ESPE delegates presented at their respective plenary sessions and participated in a postgraduate training programme for budding Chinese endocrinologists. In 2012, it was the turn of gary Butler (london, uk) to represent ESPE, while in october 2013, the baton will pass to gabriele Haeusler (Vienna, Austria). Although language remains an issue, all our ESPE speakers have commented on the great enthusiasm among local paediatric endocrinologists, which helps to break down such barriers and fosters closer collaboration. ESPE feels privileged to continue to support CSPEM activities. We hope to include news and scientific updates from CSPEM 2013 in a future issue of the newsletter

nEonATES AnD InfAnTS WITH THE rArE ConDITIon congenital hyperinsulinism in infancy (CHI) are the focus of integrated basic science and clinical research in our laboratories at the university of Manchester, uk. Working closely with the northern Congenital Hyperinsulinism Service based at Manchester royal Infirmary and led by Dr Indi Banerjee, the academic research team are exploring new ways to diagnose and treat this devastating condition (for review see Banerjee et al. 2013 Clinical Endocrinology (oxford) 78 803–813). We employ novel approaches to understand disease pathogenesis, using post-genomic technologies such as proteomics and metabolomics on patient serum, in combination with more traditional studies of cell biology and function on insulin-secreting cells removed during pancreatectomy (e.g. Powell et al. 2011 diabetes 60 1223–1228). Currently fewer than 50% of patients with transient or persistent CHI have identified gene mutations, and this makes both prediction of disease outcome and selection of the most appropriate treatment difficult. By understanding the disease processes using a network biology approach, we hope to identify new prognostic disease biomarkers and personalised treatment strategies (Stevens et al. 2013 orphanet Journal of Rare diseases 8 21). The research team regularly collaborate with clinical colleagues throughout Europe to share protocols, samples and know-how. Any ESPE colleagues who would like to participate in multi-centre studies, donate post-operative tissue or collaborate directly are welcome to contact mark.j.dunne@manchester.ac.uk or karen.e.cosgrove@manchester.ac.uk. Mark Dunne and Karen Cosgrove, university of Manchester, uK DurBAn, SouTH AfrICA, was the setting for the African Society for Paediatric and Adolescent Endocrinology (ASPAE)’s Annual Meeting, on 15–17 May 2013. In total, 39 paediatric endocrinologists took part, from 8 countries. Most were from South Africa or nigeria (host of ASPAE 2012 and home of the second PETCA (Paediatric Endocrine Training Centre for Africa)), while others travelled from Botswana, ghana, kenya and Tanzania, with guests from India and the Czech republic. Abiola oduwole, ASPAE Past President, welcomed delegates, commenting, ‘This is our fourth meeting, and it is wonderful to see how we have grown. I clearly remember the first meeting in 2010, with all the excitement and expectation that finally, a dream I had, and felt might never materialise, was going to be fulfilled. We must recognise lucy, our foundation President, and the team – Tom, renson, risper, Paul, kerstin, Ze’ev, ragnar, faisal and the PETCA fellows – who succeeded against great odds in making that date a historic one.’ kubendran Pillay, 2013 Conference Chair and ASPAE President, summarised the current needs of African countries: ‘As they emerge from a colonial and oppressive past, positive political, economic and social changes take hold. As epidemics of infectious disease start declining, non-communicable and chronic conditions are increasingly recognised as causes of significant morbidity and mortality. The maturing healthcare system is diagnosing more children with endocrine disorders. These changes are leading the demand for more skilled clinical care and scientific research in this area.’ The 3-day scientific programme included 20 invited lectures and meet-the-expert sessions, with numerous oral presentations and posters. It clearly demonstrated the recent major achievements in African paediatric endocrinology and the increasing capability to provide high quality patient care in low income countries. The invited guest from India, Dr Virmani from new Delhi, shared her great experience in establishing comparable levels of up-to-date care for diabetic children who originate from a range of socio-economic backgrounds, and in building an infrastructure for chronic paediatric patients in general. Meeting African colleagues and friends brought inspiration for both parties. Europeans have much to learn from Africa, such as how to use, and not overuse, the available resources. Thanks are due to the organising Committee: kubendran Pillay, Abiola oduwole, yasmeen ganie, Dipeselema Joel and Edna Majaliwa. The next Annual Meeting of ASPAE takes place in May 2014 in Dar-esSalaam, Tanzania, with Edna Majaliwa as the local Chair. Jan Lebl and Stanislava Kolouskova,  ESPE delegate

Bringing you recent highlights from the world of research

ESPE is now more than 50 years old. Your Society has been uniting paediatric endocrinologists ever since its formation,
aiding communication and education and improving patient care. In this article, we look back at the Society's formative 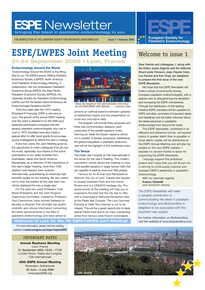 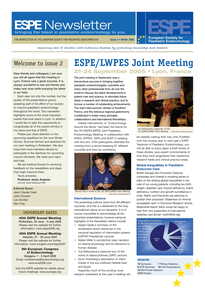 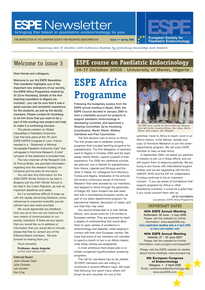