It is with great sadness that we have learned that Professor Jean-Louis Chaussain passed away on January 4th 2021 at the age of 83. 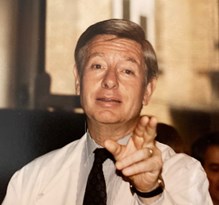 Professor Jean-Louis Chaussain was an internationally recognized paediatric endocrinologist. Besides science and research, Jean-Louis contributed significantly to the development of the discipline in France and Europe.

He had trained and performed pioneering work in San Francisco with Melvin Grumbach. This experience was instrumental for his academic career, and for his clinical and scientific approach to the field of paediatric endocrinology.

Jean-Louis Chaussain was head of department at the Saint-Vincent de Paul hospital in Paris, first at the polyclinic from 1986 to 1989 and then at the department of paediatric endocrinology from 1989 to 2003. He chaired the "France-Hypophyse Association" from 1991 until its closure in 1997 and played a key role in the development of the use of recombinant growth hormone in France. He had been a member of the French Academy of Medicine since 2005.

At Saint-Vincent de Paul, Jean-Louis Chaussain was able to create a stimulating and innovative environment where key advances in several aspects of paediatric endocrinology were made among them in the fields of growth - his favourite domain, adrenoleukodystrophy, immunotherapy of diabetes, mechanisms and diseases of puberty, and adrenal tumours.

He trained dozens of paediatricians in paediatric endocrinology, in France and from all over the world and has always maintained close links with a large number of former students and residents. He was also able to create a network of professional collaborations and friendly interactions with colleagues from different countries in Europe, around the Mediterranean and from all over the world.

Jean-Louis garnered a myriad of professional appreciations and received the Andrea-Prader Award in 2002.

A man of great culture, strongly linked to his native region of Auvergne but even more to Provence and Italy, he was able to share his curiosity and knowledge with those around him. He will long be remembered as a leading scientist in his field, a mentor and an honourable Researcher.

ESPE shares the pain of his daughters, grandchildren and of all those who met or worked with him.

Previous newsletters can be viewed and downloaded from the archive.